A group of Australian actors have visited the memorial for Dr Elsie Inglis who set up the Scottish Women’s Hospitals to treat wounded soldiers during World War I.

Their production, called Hallowed Ground written by Helen Hopkins and Carolyn Bock, traces the story of Australian female military doctors across the past 100 years. 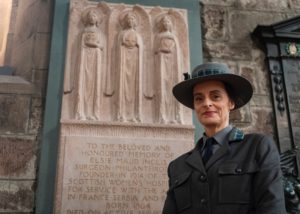 The first of their four characters is Lilian Violet Cooper, played by Helen Hopkins, who worked with the Scottish Women’s Hospitals units in the snowfields of the Balkans because the Australian government refused to let women serve.

Many Australian medical women found places in these outfits, which were staffed entirely by women, and in doing so paved the way for the future.

Hallowed Groundis part of the Army@TheFringe programme (in association with Summerhall) presenting five productions about life in and out of uniform.

The cast of Hallowed Ground went to see Dr Inglis’ memorial, which is in St Giles, on Edinburgh’s Royal Mile, to pay their respects to a figure of worldwide social, political and medical significance.

Helen said: “We’ve put the words on the page and into the voice of our World War One surgeon Lilian and now, here we are standing at the memorial to Elsie Inglis – founder of The Scottish Women’s Hospitals for Foreign Service.

“So many Australian women served under her tartan banner. It is fitting that we pay tribute to her here, it somehow makes the journey of Hallowed Ground complete.” 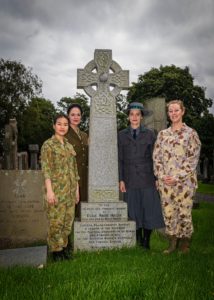 Lilian’s story was typical of the trailblazing group of Australian female doctors that determined to serve abroad during WWI despite their exclusion from the Australian military.

In Hallowed Ground we see how Lilian, accompanied by her long-term companion Jo; played by Carolyn Bock, who chooses to volunteer as an ambulance driver, joins the Scottish Women’s Hospital.

It’s a dynamic team of women offering their expertise in so many medical fields despite the overwhelming prejudices of the time.

She finds herself at her best on the forgotten Eastern front in the Balkans serving the Serbian army in a remote, makeshift surgical outpost.

Her expertise as a surgeon proves indispensable in an otherwise hostile and harsh environment.