The experiences of women in uniform too often go unreported. Hallowed Ground, which is part of the Army@TheFringe programme, is helping put that right. Created by The Shift Theatre from Australia, it follows the fortunes of four female military medics and a century of service. Here the team behind the drama explain its origins and reveal more about the women who inspired them.

The stories in Hallowed Ground – Women Doctors in War are all true. We’ve met some of the women. What an incredible honour.

We are continually floored by the women we meet and read about- their breadth of experience. We just don’t hear their stories enough when it comes to stories of war, conflict and peacekeeping. Not enough.

But the stories are there.

In diaries, medical journals, letters to loved ones, historical records… in face-to-face conversations that are ongoing. (It doesn’t get any better than that!)

We started out with an idea – to tell stories of women doctors and see if we could cover a century of service. 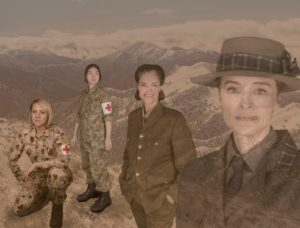 On our journey we met a wonderful veteran Ret. Col Susan Neuhaus who served for 25 years as a surgeon with the Australian Defence Force. Her book, co-authored by Sharon Mascall-Dare: Not for Glory- A Century of Service by Australian Medical Women to the Australian Army and it’s alliesbecame our touchstone, particularly for the contemporary stories.

The character of “Catherine” holds stories that reflect her own. She is the voice of a wife and mother. She is the surgeon who exists in a bubble. She has every piece of necessary equipment at her fingers tips – in stark contrast to Lilian of World War I who can see the front line from her makeshift surgery in a tin shed.

We pieced together Lilian’s story from newspaper articles, one titled Lesbians of Brisbane, Scottish Women’s Hospital diaries; in particular, Dr Agnes Bennett, and the extraordinary manuscript of Miles Franklin’s: Nemari Nista: Six months with the Serbs. 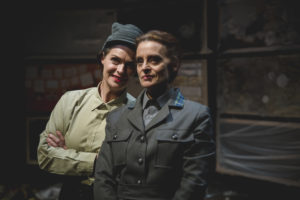 For WWII Major Mary Thornton, we turned to her own war memoirs from her book Matilda Waltzes with the Tommies – tales from her time spent in the Middle East with the British Army, denied service with the Australians.

Tam (we flew to Brisbane to meet her) wondered why we wanted to put her story in a play. We said “because your story is remarkable! You got on a little fishing boat with your parents and your siblings and you fled war torn Saigon. You strived to excel. You got your medical degree from the Australian Army in relative peacetime and ended up in Iraq! That’s why.” Tam’s story is so desperately important. Through Tam we see children. We see refugees. Children are everywhere in the contemporary stories. 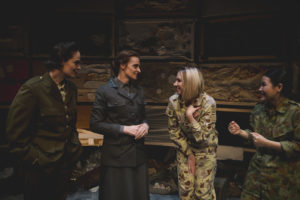 And then there is Carol in Rwanda. We met the Australian Surgeon General Tracey Smart after performances at the Australian War Memorial in Canberra. She is Carol’s friend. She arrived the day after the Kibeho massacre. She had a lot to say.

What continues to astound us is how many people are connected in some way to at least one of the stories … and how so many people can still site a grandparent’s story of the second or first World Wars. And how many people still have no idea about women in service.

We are so thrilled to be alongside kindred stories about women on active service here at Army@TheFringe.